Will Microsoft Ever Learn?

This is an old cartoon showing the organisation chart of Microsoft and its warring fiefdoms. 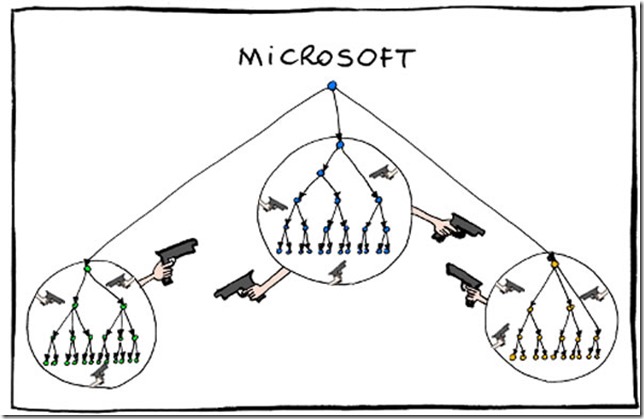 It was certainly true back in the day when I had business contacts with Microsoft on behalf of my employer.

And it would seem that even today, plus ça change, plus c’est la même chose…

In this time of social-distancing, the need for an easy-to-use video-conferencing tool is self-evident. I needed to find one for our local village community committee (I’m the secretary) so that we could hold our meetings online.

I’ve been a Skype user since its introduction in 2003, and so that was my first thought. However, it was acquired by Microsoft in 2011 and the technology became enmeshed in Microsoft’s internal politics. Microsoft had its own rival technology: Windows Live Messenger, and a shotgun marriage was hastily arranged.

As a result, the evolution of Skype in Microsoft has not been smooth, and even today it looks as though it is the result of ideas that have been thrown at a wall to see if they would stick. There is also Microsoft’s Skype for Business (which, as Wikipedia points out is “Not to be confused with Skype”). Microsoft also announced in 2017 that Skype for Business would be phased out in favour of Microsoft Teams, yet another online collaboration platform.

I took a quick look at the free version of Microsoft Teams to see whether it might be suitable for use in our committee. I was not impressed. I set up a simple team of two users and found that the security hoops that you have to jump through before Microsoft Teams will accept someone into a team would try the patience of Job. It also seems as though having a Microsoft Account is essential for entry, and that is already a stumbling block for many people. I don’t think everyone on our committee has such a thing, and it would be a big ask for them to get one.

I then found that shared documents wouldn’t share – Teams would merely give me a cartoon of a melted ice-cream cone with the words “Something has gone wrong”. Not very helpful. Twenty-four hours later, it seems to have mysteriously fixed itself, but it doesn’t exactly fill me with confidence.

So the choice at the moment (in Microsoft products) is between the simpler Skype or the bells and whistles of Microsoft Teams, which is firmly aimed at business and enterprise users.  The choice is not made easier by today’s announcement that Microsoft will be bringing a version of Teams aimed at home users – impinging on Skype’s turf. Skype is also under threat from non-Microsoft rivals such as Zoom. As Tom Warren says in his article in The Verge:

Microsoft wasn’t afraid of ditching the 100 million people using Windows Live Messenger years ago, and I wouldn’t be surprised to see the company try and push Skype users over to Teams in the months ahead. Like Microsoft said, “For now, Skype will remain a great option for customers who love it and want to connect with basic chat and video calling capabilities.” The “for now” part of that statement is a telling sign that Microsoft’s focus is now Teams, not Skype.

As I said: Plus ça change, plus c’est la même chose…

Addendum: I mentioned Zoom above. I see that it has rather become the victim of its own success. Because of Covid-19, the number of users has skyrocketed, and the resulting upsurge in numbers has revealed some rather worrying privacy and security issues in the product. I really don’t want to touch it with a bargepole, and will stick to Skype, thank you.

I'm a British citizen, although I have lived and worked in the Netherlands since 1983. I came here on a three year assignment, but fell in love with the country, and one Dutchman in particular, and so have stayed here ever since. On the 13th December 2006 I also became a Dutch citizen.
View all posts by Geoff Coupe →
This entry was posted in Computers and Internet, Organizations and tagged Microsoft. Bookmark the permalink.