Just a couple of days to go before the launch of Windows 10, and Microsoft has blogged about the built-in apps present in the new operating system. Microsoft describes the apps as “great”. I think many of us would beg to differ; we are finding that the media apps in particular are a step backwards from those that are in Windows 8.1.

Barb Bowman goes into detail about the shortcomings, and, if using Windows to play back your media is important to you, you should definitely check out her post.

In addition to these shortcomings, the Windows 10 Photos app is pretty abysmal. You can’t browse individual folders of pictures, it will only display pictures arranged by date. Interestingly, browsing by folders was originally in the app, but it has now been removed by Microsoft. I notice that the advert in the Microsoft blog post still shows the older version of the app, with folder browsing present:

Either Microsoft are being disingenuous here, or someone’s been sloppy, because the Folder view is missing from the latest version (and has been for some months now): 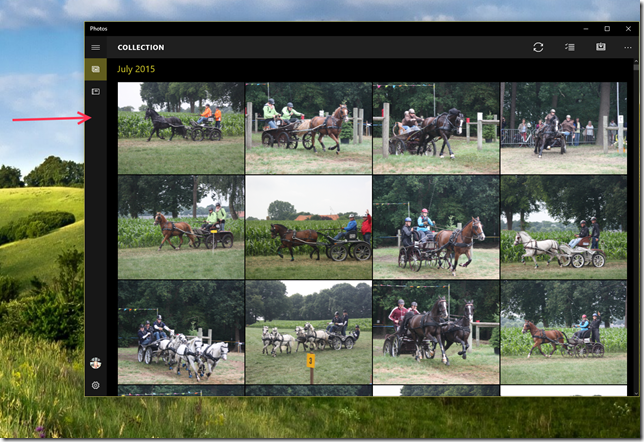 So where has the Folders view gone? I need it back – it makes it impossible to find stuff without it (and there is still no possibility to search photo metadata tags in the app).

Frankly, with the current state of this app, I find it next to useless, and use other photo apps in preference. However, Windows 10 will force you to use it in certain circumstances. For example, if I want to add someone’s picture to their contact details in the People app, Windows 10 will bring up the Photo app so that you can select the picture you want to use. Without a folders view, I have to use File Explorer to find out the date taken of an image, and then use the Collection view in the Photos app to scroll to the date of the image to copy it into the People app. This is extremely cumbersome, and far from fast and fluid.

It almost gives the impression that Microsoft teams don’t actually test out the use cases… I am not impressed.

I'm a British citizen, although I have lived and worked in the Netherlands since 1983. I came here on a three year assignment, but fell in love with the country, and one Dutchman in particular, and so have stayed here ever since. On the 13th December 2006 I also became a Dutch citizen.
View all posts by Geoff Coupe →
This entry was posted in Computers and Internet and tagged Windows 10. Bookmark the permalink.