One of the pleasant things about living in the Dutch countryside is that we get to participate in traditions that are non-existent or being eclipsed in cities. One such tradition is Noaberschap (neighbourliness). Martin and I are the Noaste Noabers (closest neighbours) of Herman and José. This means that we are responsible for organising the rest of Herman and José’s neighbourhood (Buurt) in times of celebration or need.

Herman is a dairy farmer, and last month one of his cows, Hetty 176, reached a milestone. In her 14 years of life, she has produced 132,000 litres of milk and 10,000 Kg of fat and protein. That, coupled with the fact that the farm has been in existence for 101 years, meant that it was clearly time for a celebration. So last Friday evening, the Buurt gathered in a neighbour’s barn, and we decorated an arch with greenery and paper flowers (red, white, and blue, the colours of the Dutch flag). Late in the evening we took the arch round to Herman and José’s and erected it in front of the entrance to their barn. 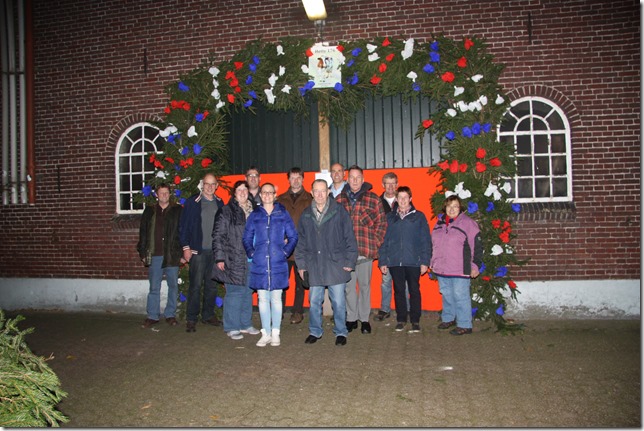 Yesterday, the Buurt, together with Herman and José’s family, friends and farming colleagues, met in the barn to celebrate Hetty’s achievement. There were representatives from CRV (a Dutch cattle herd improvement company) to present a ribbon to Hetty and a certificate to Herman. Martin and I, on behalf of the Buurt, put a laurel wreath on Hetty, and presented gifts from the Buurt to Herman and José. More speeches followed, including an emotional one from José, who reminded us that farmers do not have an easy life, and that good farmers care about their animals above and beyond the call of duty. José is very proud of Herman, and rightly so. 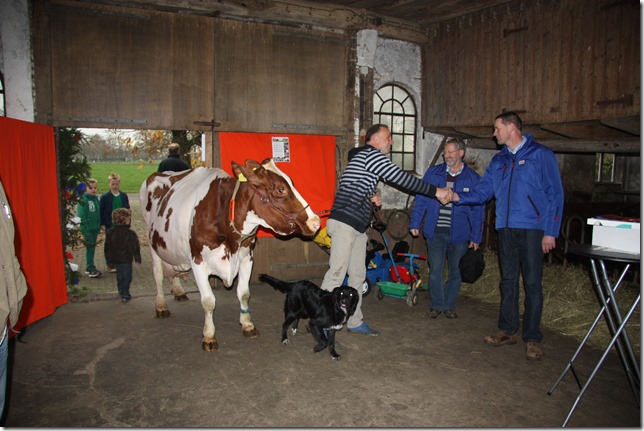 The afternoon was rounded off by a meal at a nearby restaurant hosted by Herman and José. A very good day.

I'm a British citizen, although I have lived and worked in the Netherlands since 1983. I came here on a three year assignment, but fell in love with the country, and one Dutchman in particular, and so have stayed here ever since. On the 13th December 2006 I also became a Dutch citizen.
View all posts by Geoff Coupe →
This entry was posted in Events, Friends, Society. Bookmark the permalink.