Then and Now – II

Here’s another example of the changes that have occurred over time on the Isle of Man. This time it’s views of Douglas Bay. The first photo was taken in about 1860 (I think). It’s a bit difficult to see, but at that time the promenade on the seafront, with its frontage of boarding houses, did not exist.

This second (hand coloured) photo must have been taken after 1892, but before 1913, because by this time the promenade and boarding houses are visible (built in 1878), and the Victoria pier is in place (opened in 1892), while the Villa Marina (in the estate in the middle of the seafront, just to the right of the first row of boarding houses) looks to be the original private house. By 1913, the house had been demolished and the Villa Marina concert hall had been completed and opened to the public.

And here’s a photo that I took from a similar standpoint on Douglas Head in 2005.

Moving a little way along Douglas Head, and back in time to the early 1900s, this coloured postcard shows the funicular railway that used to run from near the base of the cliff up to the top.

Nothing remains of the railway now, as it was dismantled in 1954. By the way, you can see from the number of passenger steamers docked at the Victoria Pier just how popular the Island was as a tourist destination at that time, as these postcards illustrate: 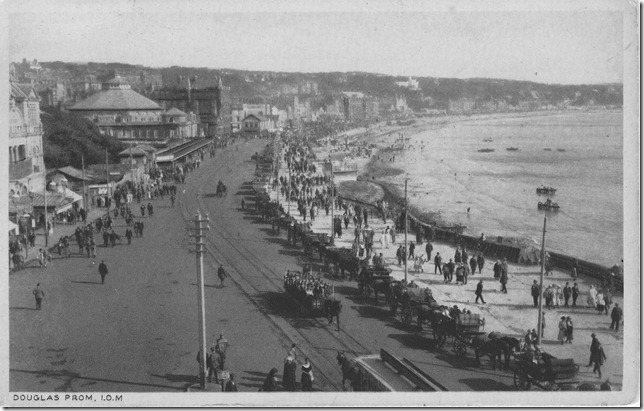 I'm a British citizen, although I have lived and worked in the Netherlands since 1983. I came here on a three year assignment, but fell in love with the country, and one Dutchman in particular, and so have stayed here ever since. On the 13th December 2006 I also became a Dutch citizen.
View all posts by Geoff Coupe →
This entry was posted in History, Photography. Bookmark the permalink.