I’ve got a pile of postcards and old photos that I inherited from my father. Many of the postcards he collected from places that he visited around the world, when he was a merchant seaman in the 1920s and 1930s. There are also lots of postcards of places in the Isle of Man, where he and I were born. As well as reproductions of 18th century engravings, there are photos; the earliest of which date from 1860. Here’s an example of one of these, showing Douglas Bay: 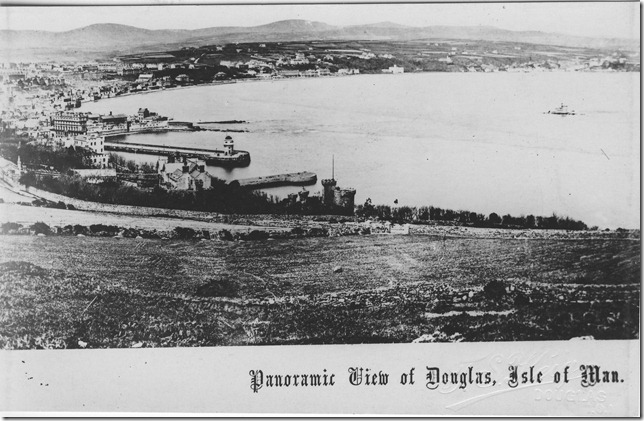 But there is one photo that has always intrigued me. It shows a wedding party, in the grounds of what could be a rather grand house. Other than the fact that it certainly couldn’t be any of our family, I had no idea who these people were, or where the photo was taken. Until, that is, a couple of days ago… 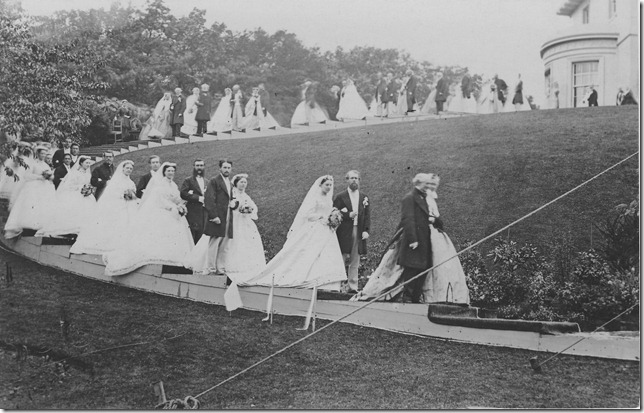 My brother has finally solved the mystery – he came across the same photo in a book. It is the wedding of Louisa Jane Dumbell and Alfred Charles Elliot on the 23rd June 1866. Louisa was the daughter of a prominent Manx figure of the time, George William Dumbell. He founded his own bank in 1853, and it had a fairly chequered history until its collapse in 1900. However, in 1866, George was riding high, and he made sure his daughter’s wedding was a lavish affair:

In 1866, on the occasion of the marriage of his daughter, Louisa,to Mr Elliott, of the Indian Civil Service, the most lavish expenditure was indulged in. The SUN columns described the bride’s dress as being of “white satin, trimmed with three rolls of satinround the skirt, bodice trimmed with Bruxelles point lace, with crystal buttons, Bruxelles lace veil, wreath of orange and myrtle,pearl ornaments, etc. She was attended by eight bridesmaids, and the wedding party completely filled the church at Braddan. A troop of workmen had been for weeks employed in erecting a. monster marquee in the grounds at Belmont, which were illuminated and decorated with fairy-like grandeur.” The wedding festivities terminated on the fourth day with a great ball in the Castle Mona Hotel.

The photo shows the wedding party in the six-acre grounds of “Belmont”, the house that George Dumbell had built in 1835. And now, with the benefit of knowledge, I realise that I should have recognised the house in the photograph, because I played in the house and grounds as a child. One of my schoolboy friends was Michael Crowe, and his family lived in Belmont (which by this time had been split into two semi-detached , but still very grand, houses). We spent many happy hours playing in the very Rhododendron bush that you can see on the left of the photo. By the 1950s, it had grown to gigantic size, and it was our jungle and climbing frame all rolled into one.

I'm a British citizen, although I have lived and worked in the Netherlands since 1983. I came here on a three year assignment, but fell in love with the country, and one Dutchman in particular, and so have stayed here ever since. On the 13th December 2006 I also became a Dutch citizen.
View all posts by Geoff Coupe →
This entry was posted in Events, Family, History. Bookmark the permalink.