Yesterday I left Martin in charge of the dogs while I travelled to Rotterdam for a day out with a couple of old colleagues. I arrived at midday, and the original plan was to stroll from Central Station down to the Veerhaven, catch a water taxi there and cross the Maas river to the Hotel New York for lunch.

Alas, we had hardly started walking when the heavens opened, and what can only be described as a tropical downpour commenced. As a result, we abandoned that plan, and took shelter in the museum Boijmans van Beuningen instead. We had intended visiting it after lunch anyway, so we thought that we would switch to having lunch in the museum. It has a roomy restaurant overlooking a park, thus plan B was looking good.

We bought our museum tickets, and announced to the cashier that we would go straight to the restaurant first for lunch before strolling around the exhibits. “Ah”, she said, “sorry, but the restaurant is closed for renovation; only the coffee bar is open”. She pointed to the coffee bar next to the museum entrance and our hearts sank. The coffee bar was small, crowded, and with very little in the way of choice of food. Still, we decided to have coffee while we ruminated on the date.

We enjoyed the Notion Motion installation by Olafur Eliasson. A very effective visual experience using very simple means. I was personally less impressed by the work of Thomas Demand, although I can appreciate the work that went into constructing it.

One thing that we all wanted to see was the exhibition of the work of Han van Meegeren, who became (in)famous in the 1940s as the man who faked Vermeers. It’s definitely an exhibition worth seeing. It captures the scandal that rocked the art world very well. The museum itself was at the centre of the storm, since, in 1937, the ambitious director of the museum, Dirk Hannema, wanted to purchase The Supper at Emmaus by Vermeer which had just been discovered. Of course, this was actually a forgery by van Meegeren. Hannema managed to raise 520,000 guilders – a huge amount for the time – and purchased the painting. Ironically, one of the first things that the museum did was to have the painting restored. Ironic, since it wasn’t a 17th Century painting, but something that had been painted the year before on a 17th Century canvas.

The thing that struck me, looking at these paintings, was how bad they are. I know I’m no expert, but I would never have said that these were genuine Vermeers in a million years. And yet, the art historians at the time, notably one Dr. Abraham Bredius, fell over themselves in praise. There’s a book in the exhibition, a compendium of great works of art with texts by prominent art critics. It is open at the page depicting The Supper at Emmaus, and the text is by Bredius. It is no exaggeration to say that Bredius is fulsome in his praise, embarrassingly so. It is hard to read it today without bursting into laughter mixed with pity at poor Bredius’ total misjudgement.

Was this a case of the Emperor’s New Clothes syndrome or mass hysteria? Clearly, someone must have planted the idea that these were genuine Vermeers at the start. Was he mistaken, or was he in on the game? Whoever it was, I don’t think it was Bredius, as he seems to have been a target of van Meegeren. But Bredius certainly fell for the forgeries; hook, line, and sinker.

The video of the story on the museum’s page is worth watching, and the English Wikipedia entry is definitely worth reading for the full sordid story of greed on all sides. Strangely, the Dutch Wikipedia entry is less revealing… Perhaps the Dutch are still embarrassed by the affair, or they don’t want to view van Meegeren as anything other than a hero, when in fact he was a criminal and a Nazi sympathiser.

After the museum, we strolled down to the Oude Haven, passing the Erasmus Bridge, and there, in the shadow of the Kubuswoningen, finished off our jaunt with a few beers and bitterballen. 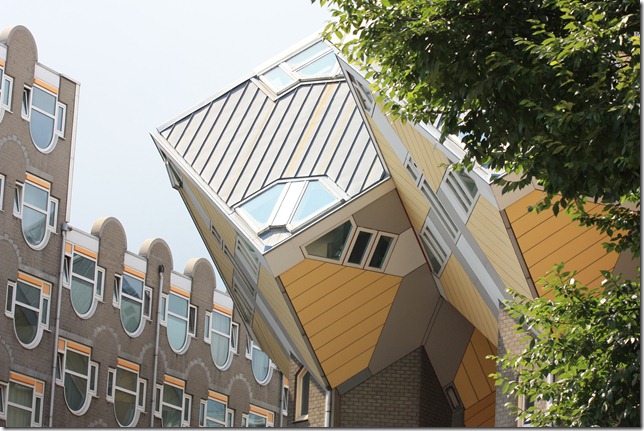 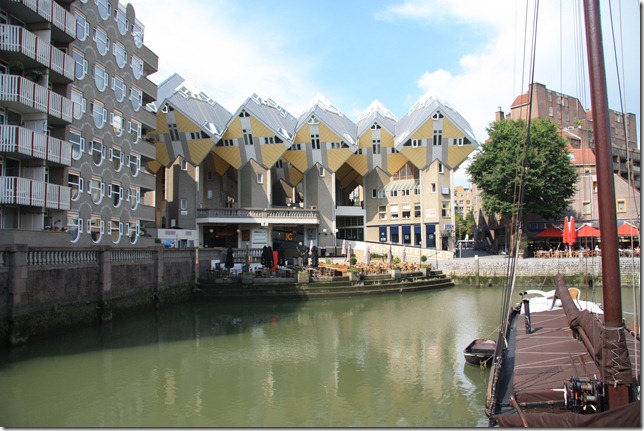 I'm a British citizen, although I have lived and worked in the Netherlands since 1983. I came here on a three year assignment, but fell in love with the country, and one Dutchman in particular, and so have stayed here ever since. On the 13th December 2006 I also became a Dutch citizen.
View all posts by Geoff Coupe →
This entry was posted in Architecture, Art, Travel. Bookmark the permalink.